Based out of Canberra, Australia, Shoosh Monkey PTY LTD is a G Suite support and software development agency that creates unique bespoke tools for many types of businesses.  Speaking about his business, Shoosh Monkey’s “Chief Monkey” Kris Hogh notes, “After exploring G Suite (Google Apps for Work at the time) for collaborating with friends organising events, the more I used it the more I felt like this was the platform of the future and one I wanted to stand behind.”

“We use every part of G Suite in our consultation process when designing software for clients, from documents that contain the project outline, Google Drawings for mock-ups to Google Slides to present our project idea and estimations.” Collaboration with their corporate partners is key to meet the software design needs of a busy, modern business.

“We’re an open book and our clients are exposed to every aspect of our operations, we need to know them very well in order to create customised solutions just as much as they need to know and trust us.”   says Kris about their rigorous and inclusive design process.

“That was my first big lesson in cloud computing,” Hogh says. “While your data is always available, it’s not necessarily safer.”

Later, Kris went in search of a backup solution that would give him data protection peace of mind. “I eventually settled on CloudAlly,” says Kris. “Their backups were incremental, the restore process was straightforward, and the pricing was simple.”

With ease-of-use as a primary goal, Shoosh Monkey didn’t want to integrate a complicated G Suite backup into its customized software. Instead, Kris chose CloudAlly G Suite Backup for its user-friendly modalities. “The interface is simple and intuitive,” he says.

“There are no unnecessary options, which I love. We just connect the backup and leave it alone.” Affordable Peace of Mind Kris appreciates CloudAlly because it is an affordable solution, and with its focus on G Suite, it’s a no-brainer for Shoosh Monkey and our clients. “Three dollars a month for peace of mind?” he says. “There’s no question of value for money.”

At the same time, CloudAlly still provides top-notch customer support – a feature that Kris prioritizes for himself and his customers and another reason why he partnered with CloudAlly. Kris explains why CloudAlly was such a strong fit with his business. “Our MO (Modus operandi) is to build products and designs that are cleverly simple.

And everything we use internally fits in with our MO. CloudAlly is no exception.” Intuitive, Routine Backup Streamlines Restores Kris appreciates the incremental backup that CloudAlly for G Suite Backup provides. Rather than having to continually worry about his backup program, he can, instead, leave CloudAlly alone – assured that the software is performing its function each day.

CloudAlly’s well-chosen innate features gives Hogh certainty that his backed-up data will be retrievable if needed. And when a restore is necessary, Hogh notes how efficiently CloudAlly has helped him restore lost data. “The functionality of CloudAlly is great,” he says. “I have had to restore a few times for various reasons and it’s been a life-saver.” CloudAlly gives Kris and others like him straightforward functionality without the worry. With its common sense design,

CloudAlly incorporates only value-adding features into a design that don’t clutter its primary function: holistic backup for G Suite. 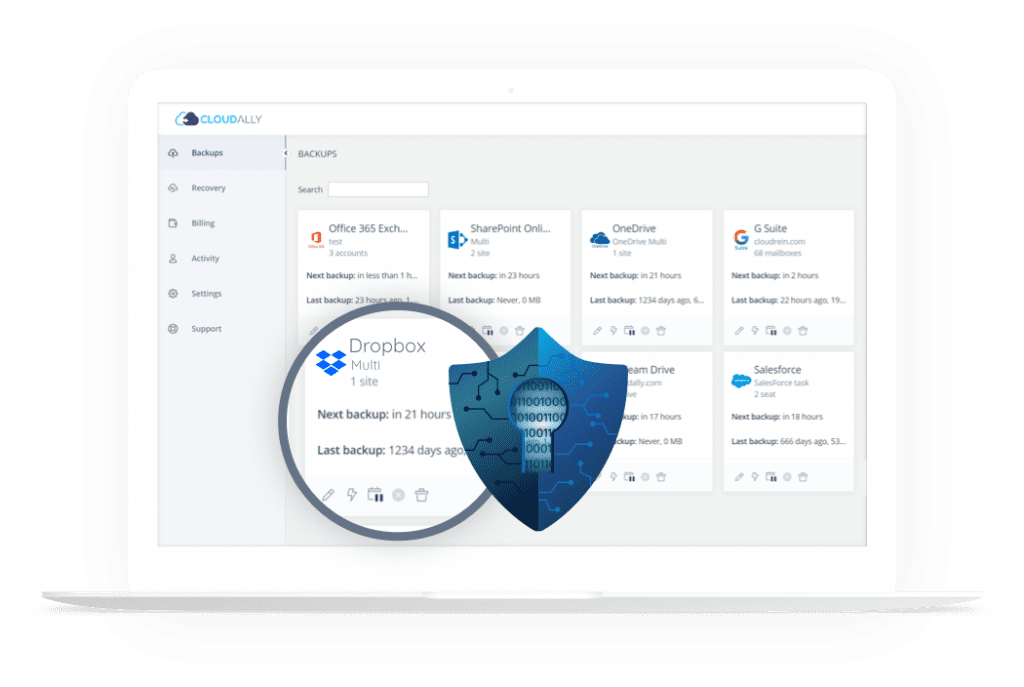 Got 1000+ Accounts to backup? We have a special offer for Enterprise Level Pricing. Also, Education and Non-Profit Discounts available.